February 20, 2008 in publicbroadcasting | No comments

As I unpack my bags and settle in, here at the Omni I look out the North West window and see a radio tower next to an art deco building. In the foreground is a interesting architectural slight of hand where, painted all along a block wall, are faux windows in the neo-classical style. Closer, in the courtyard, is some interesting public art and an open patio where people are walking after another day at the office.

It’s overcast, and I decide to go out an photograph the buildings and public art around the hotel. I call Susan Meyer from WOSU. We agree to meet at 6:30 by the concierge desk for dinner. I’m looking forward to talking with her, finding out how everything is going with the Columbus Social Media Cafe. In order to get back to the hotel in time, I realize I have to pick something to shoot that’s close. 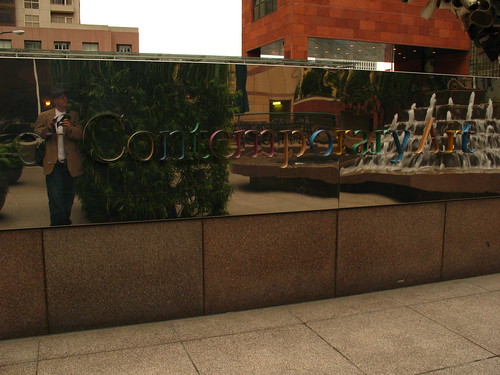 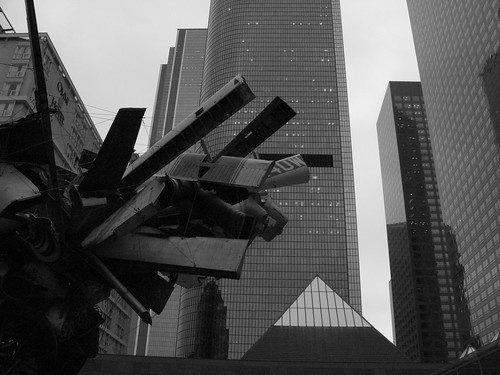 As I’m looking at the thing I notice a person meditating out in the open, and the juxtaposition of this sharp, angular object against this vulnerable human figure really captures my interest. I snap away, playing with different kinds of framing and angles. I wasn’t sure then if I had captured what it was I had hoped to express, but looking at the photos now, I think this one comes really close: 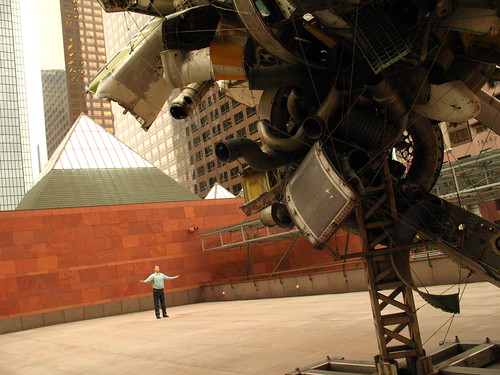 So. Here it is not more than 45 minutes into the trip, and already I’m feeling pretty darn liberal arts.

I head back into the lobby to meet Susan and first thing, I run into Jack Brighton from WILL and John Barth from the PRX. Now THIS is what I came for. Two great people who are doing interesting things! For all the “initiatives”, “concepts” and “opportunities” that will be bandied about over the coming week, it’s the people, it’s people like this, that I put on the top of my list.

We all start talking, catching up with one another. Bob Lyons from WGBH comes by, and finally, we both are able to put a face with names we’ve only seen in email. It seems a current is beginning to move the crowd towards the front entrance.

The ever gracious Terry Hall-Jackson stops to say hello. The weight of the conference rests on the shoulders of Terry and a small battalion of people just like her so Thanks Terri! (Congratulations on your appearance on Oprah… I’ll bet your story would make a driveway moment as part of “This I Believe”). Terri encourages us to go along with the group, mostly General Manger types, CEOs the real movers and shakers in pubic broadcasting. I feel a bit out of my league, but I figure what the heck. The bus is leaving for NPR West, and frankly I’m not about to pass up the opportunity.

I’m seated by John Weatherford, a seasoned media professional whose found his calling over the last few years at Public Broadcasting Atlanta. I tell him I’m from KJZZ and he immediately perks up. Turns out he was in Lonon recently at a fly-in hosted by the BBC and PRI. There, he met Mark Moran. He could not be more complimentary. Mark, if you’re listening, John Weatherford says Hi!

The two of us have a great conversation. He tells me about his reaction to watching a live broadcast of the BBC’s “World Have Your Say” and talks about how enthusiastic he is for enacting this kind of change at his stations. He tells me about the many battles that he has to moderate between so many equally valid competing interests, and how he helped enlist community support for PBA’s conversion to HD Radio in hopes to better serve a contingent of vocal supporters of classical music. Negotiating is definitely John’s strong suit.

We get to talking about the upcoming commiseration dinner for change agents and somehow veer the conversation into shallow, rocky water kind of grousing about the inhuman effort that it takes to enable change, and John turns the conversation around with few colorful southern colloquialisms. He tells me how fortunate he was to have good mentors at all the right times in his life, and how, as a philosophy major in college, he is grateful for his success. (Later on, over chips an guacamole dip, we raise a toast to good stories and good writing and good radio! Here! Here !) 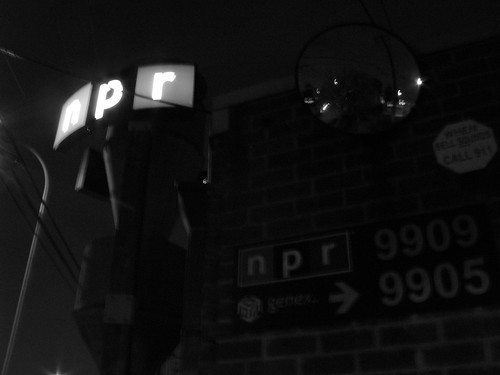 The bus pulls up at NPR West and we’re literally welcomed in the door by the director. Excuse me, I forgot your name, but thank you for being such a thoughtful and welcoming host. I especially liked hearing about all the radio rock stars that come to work at NPR West each day… and that NPR had bought the building from the Welk family (yes, that Welk family, and a one and a two…) But my question is (and I’m sure you’ve heard this one before) where’s the bubble machine! NPR west has an openness to it that I don’t remember seeing when I toured NPR in DC at the beginning of the decade.

I chatted with the head honcho at KQED, Mike, I believe was his name. I think I might have been a bit nervous because I prattled on about some coding projects that I was working on, and he was polite, but I think he was used to talking about things a few thousand feet above my level. 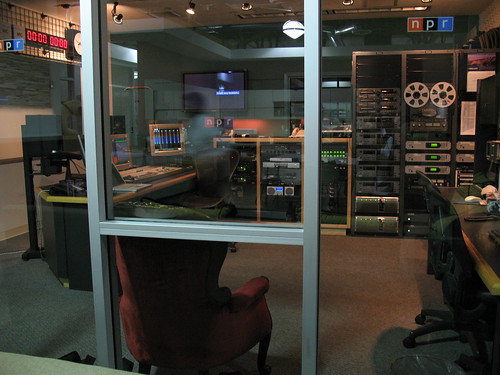 I spy my good pal Jack, talking with Mark Fuerst. They’re both relaxing on the couch, though Mark appears to be ducking for cover below the high back of the sofa. And, believe me, If I were you Mark, at this stage of the game, I’d be ducking for cover too, in an effort to preserve my energies. How these people pull off a week like this is amazing. Anyway, we nurse our Pacificos and at Mark’s request, Jack points the lens back at me: 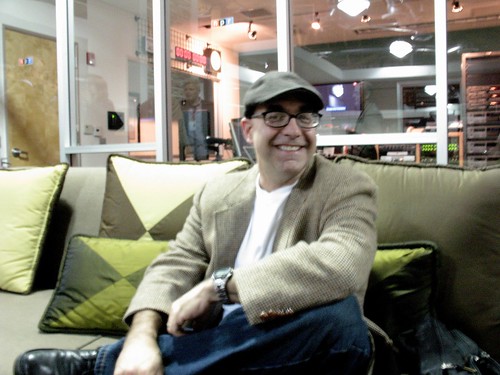 Just as earlier there was a current pulling us through the hotel lobby, so to did another current begin to draw people around the corner and into, what I’ve since come to find out was the largest “green room” in LA. The pull, was of course, food. There was tri-tip barbeque and grilled zuchhini and beans. Jack and I talked about PBCore and microformats and the opportunities that strucutring metadata in a standardized manner presents. As an aside, at one point I told him about my first introduction to MJ Bear and her cohort, a colorful creative type with orange hair, who I hear is now married to a well known public radio host. Mozeltof! Jack and I talked about many more interesting things, but I might as well say it already, I’ve been carrying around the story for so long, it’s about time I let it out of the bag an gave it some air to breathe. I was telling Jack how on my second week in public radio, Carl Matthusen, our GM flew me out to the west coast for an A-Reps’ me
eting. There, I chatted with MJ and asked her if they had any plans to use XMLfor syndication. “It’s the same model as Radio” I said. To which, she replied, “Don’t even mention that. It’s over their heads,” or something to that effect. Not to slight M.J. in the least. People were still thinking about creating “pages” not APIs or applications.

Long story short, we sit down to eat. And, of all things, the little centerpieces of freshly cut flowers were fabulous, by the way. We talk more about Drupal and Django and Ellington CMS’s, the kind of thing that we flew all this way to do and the conversation turns to the University of Illinois at Urbana and Champagne Illinois and Jack tells me this great story about how Mark Andreessen, the creator of Mosaic, built the thing in an office three blocks away from him. And that, at the same time, Jack had been showing up at this brew pub called the Blind Pig with his guitar for the Monday night blues jams. At this same time, Jack tells me that Mr. Andreessen and the other members of his team would show up for drinks and a chance to unwind after a long monday coding a cornerstone of what would soon become… Well, you know. We both entertain the notion that a bit of Jack’s soul had gone into the very DNA of the internet. And I don’t doubt it. Even to this day, we’re all contributing our distinctive bits.

Well before I wax technocratic for too long. The evening unwinds and we’re back on the bus.

This time, in the seat next to me is Linda Lawrence from the OMN. She’s a superstar, as I find out she’s a company of one. Doing a great deal for the Open Media Network in partnership with WGBH and a few other stations before she hands the project over to Ken Devine to manage. So, if you see her this week, be sure to say “Hi” and ask her how your station can get ahead of the curve for distributing video using this amazing gift and tool.

Back at the hotel, it’s late. I get into the elevator with someone whose end of the day “sigh” clearly gives away that she’s in LA for the conference. We get to talking and it turns out Colleen is a producer at KQED. We talk about everything Mark Taylor’s been doing with KQED Art’s and Culture, and the inspiration that made it all happen (and I’m saving a bit of the story for tomorrow, just because it’s so interesting… And that I’d like to save it for another blog post). I mention that I’ve talked or emailed with a few additional members of her team. She comments, “Wow, you really have talked with everyone” and I jibe myself and feel a little sheepish, in that I might have come across like a groupie. But hey, you produce something like Writer’s Block, or KQED’s quest and you deserve to have a few groupies. Great stuff!

So, we promise to run into each other again. She turns to go down the hall, and I turn to put the key into my door, the room whose position in relation to the elevator I have already committed to memory. Only, I didn’t realize it, but we had stopped a few floors short of my floor, and at 1:00am, I was jamming my key into my door’s doppelganger a couple of dozen feet below. Maybe not an apt metaphor for such an interesting evening. but maybe more an apt metaphor for someone who should simply stop writing now at 3am and get his self to bed.