February 21, 2008 in publicbroadcasting | No comments 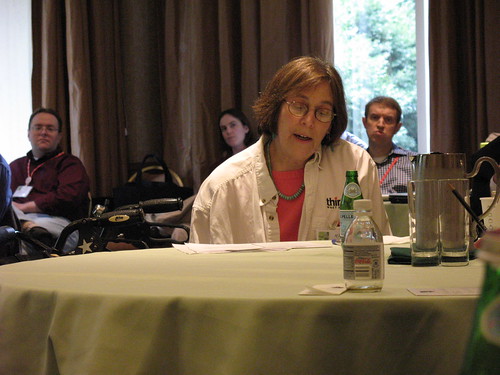 Jack Brighton, Internet Director at WILL Public Media and member of the PBCore Resource Group presents how metadata information about a media file could potentially lead to the discovery and indexing of the vast public resources of public broadcasting archives.

Jack displays a podcast feed on the screen and compares this to a pbcore feed. they look fairly similar.

He then shows what our current system for cataloging metadata about our digital archives: a cluttered desk, which he describes as TOGN or “The Old Guy Knows.”

He shows how he built pbcore into their station’s public web site (Jack has build WILL’s web archives using the CMS Expression Engine – but the discussion later on shows that any cms, just as it publishes currently publishes RSS – can publish PBCore, provided the metadata associated with the media resources is associated with the object in the database. So know that PBCore is not necessarily tied to any one database or CMS)

Access to WILL’s archives via PBCore is available online right now on their public site. Jack invites us to check out WILL’s Series on “Edible Books” and points out how making this data available in PBCore could allow for another program or service such as PBS’s Frontline could actually “ingest” pbcore into their database and make WILL’s information known to producers as they are researching stories, or could be displayed to users on their web site – and these are just two sample uses.

Jack posits that, if there was a wider practice of adopting and cataloging public media assets using PBcore, this could enable listeners, producers and researchers to search across the entire library of media resources across all of public broadcasting. Think about the amount of quality resources that this would make available. Think about the cost and time savings of not having to go out and shoot a segment of video because one of your colleagues either in the cubicle over or on another coast has taken the time to let you know about their work in a way that would actually allow you to find it.

Jack Brighton asks content creaters to think like archivists. He impresses this with humor by showing what he calls a bumper sticker for radical librarians – and implores us all to “Catalog Now!”

Jack points out that people outside of public broadcasting are excited about PBCore and are using it. The Association of Moving Image Archivists (AMIA) is developing educational materials and AV preservation using PBCore.

Jack points out a few action items. In particular, he contends that we need a Central Authority to manage updates and changes to the PBCore specification. The second action item was the recommendation for people to let the CPB know that PBCore is important to them, to us as a system.

One of the session attendees from KQED asks if we should be using PBCore instead of RSS. He describes it playfully but pointedly as “one feed to rule them all.” Jack replies by describing a “metadata engine” which can take the information out of a database and express it in many different formats.

Jeremy Roberts asks if there is a near term carrot to get people adopt and make their archives available using pbcore.

Dale Hobson asked about whether there is a parser to to display a remote PBCore feed. Dale describes this parser as similar to PHP’s Magpie – but instead of spitting out html from an RSS feed, it would display html from a PBCore feed. I agree that this practical application could yield tangible benefits, could raise the profile of the format and hasten adoption of adopting the standard. Jack also agrees that this would be a good next step.

There was more talk and some learned and passionate comments from the audience, most notably from Nan Rubin from WNET/Thirteen in New York.