Our First Day at Rene’s New Apartment in Marseille

We could not get off the island of Friol fast enough. We methodically packed and cleaned at first light and caught the first ferry of the day back to Marseille.

The boat pulled up the dock and as we walked towards the end of the pier, we looked over the shoulders of the fishmongers chatting it up with customers, their morning’s catch laid out over buckets of ice.

I wasn’t going to haul any more luggage through the streets, so we hopped into a taxi and drove in comfort the few blocks up the hill to Cati’s apartment.

We knocked on the door and Cati was surprised that we had come so soon. She had been expecting us tomorrow. We were handed the keys to Rene’s new place. It’s super cute! 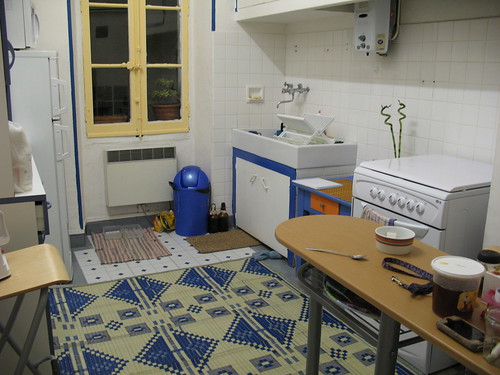 After showering and taking Alfredo for a walk, Rene and Cati go out into the the neighborhoods to pick up groceries. She comes back with sea urchins from the fish market, hot peppers from the Asian market, meat from the middle eastern market, spices from the African market, and onion, tomatoes and garlic from the grocery store down the street. Afterward, Rene cooks up a big pot of southwest chili while I take a mid-afternoon nap. We sit around the kitchen table and pour a couple of glasses of Fisher, our new favorite beer, made in the Alsace region of France. The chili turns out excellent and warms us to the core.

In addition to Rene’s laptop suffering a catastrophic hard drive failure, gaining access to the internet has been a challenge. Cati’s friend Laurant comes over and the two of us systematically determine that there’s an issue with the wireless router and that the only solution is to run a cable through the length of her apartment, from the office, through the hall, down the middle of the kitchen and through a transom window, up a trellis and in though a window to where Rene is now checking her email. 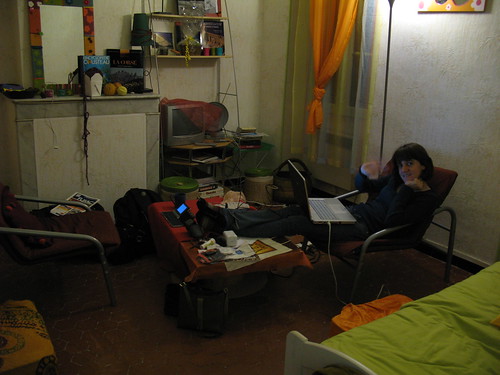 We play a game of monopoly on a French game board and settle into Rene’s new month-long home for the night.