A Few Ordinary Days in Marseille

Two days ago, Rene and I set out into the bitter wind to explore the city.

I bundled up my scarf in a way that kept me warm, but which Rene thought looked ridiculous. 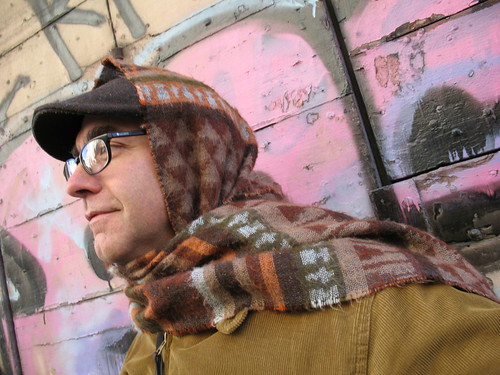 We had plans to go to the Modern Art Museum, where there was an exposition of artists from the local academy. There was some interesting and provocative work on display. I was drawn to the photographic portraits of workers, Rene was drawn to a sculpture of colorful light and glass.

We headed upstairs and no sooner did we put our foot on the top step, than we ran into Cati’s guests from Bordeaux, Stephanie and her daughter Matilde and her son Niels. We decided to meet up downstairs and spend some of our day walking together.

Rene and I looked at some of the cubist and fauvist paintings from Marseille’s past, some local artists of international renown who were part of the museum’s permanent collection.

We then met up with our friends downstairs and walked together through the shopping district. Some considerable time was spent at the Monoprix, France’s answer to Super Target. Afterward, we set out to find Marseille’s legendary soap factory. The reputation of the city’s ability to provide the world with notable soap was far more inflated than the modest storefront that we found. 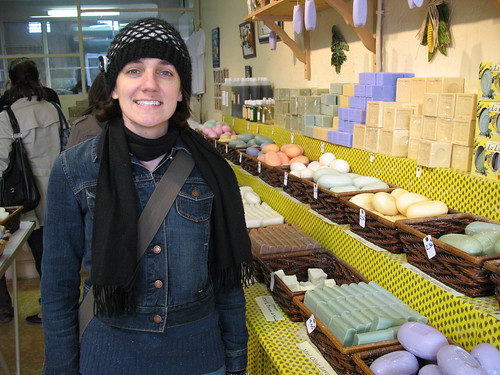 But afterward, we walked on, undeterred, our senses filled with the perfume of various, fresh bathroom scents. On the way, we saw a European restaurant chain with a funny name, Chickenville: 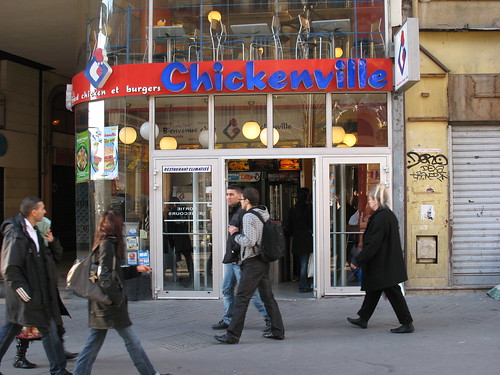 We were so inspired by the prospect of fast food, that we ducked into McDonalds for a free wifi fix and to see how the world class purveyor of wrapped sandwiches was doing things in the south of France. We checked our email on my Palm mobile device and listened to an interesting surf/rap mashup take advantage of Dick Dale’s signature sound in a new context.

After our meal, we had stalled for just enough time to take in a movie. We bought our tickets for Jack Black’s “Be Kind Please Rewind” set in Passaic, New Jersey. It was light fare when it came to character development or plot, but where it really hit it out of the park was in the Jack Black character’s comic inventiveness and in the film’s brilliant, endearing concept of “sweded” videotapes. Rene commented that the re-made scenes from Ghostbusters alone were worth the price of admission. I think too, seeing a distinctly American film, about an underdog, American city was a comfort to us. We laughed outwardly at a lot of the jokes, some of which might have been lost to the rest of the French audience reading the subtitles in the theater.

Fast forward to 24 hours. I spent most of the day reading, Seth Godin’s “The Dip” and, given the high price of last minute, in-person, language instruction, studying French through the audio CD that Rene had given me for my birthday. Aside from that, and a good afternoon nap, I helped stir and taste the chili which Rene had simmering on the stove for half the day. The last half of last night was spent drinking and talking at a going away party for one of Cati’s friends, of which the chili was an integral part. I know Rene will be blogging about the finer details of the event, so I’ll plan to link to her description here.