Getting Beyond the Tension and on to the Work

February 26, 2007 in publicbroadcasting | No comments

I was worried when I left the beyondbroadcast sessions at the end of the IMA2007 conference that people were going to get bogged down in sematics and politics. Brendan Greeley was advocating for opensourcebroadcasting to be used as the del.icio.us tag as well as for the accompanying domain. It made sense to me; so clear, identifyable, and something I could see people easily rallying around. But I had to get started on the adventure of taking public transportation to the airport, so I trusted them with the discussion. 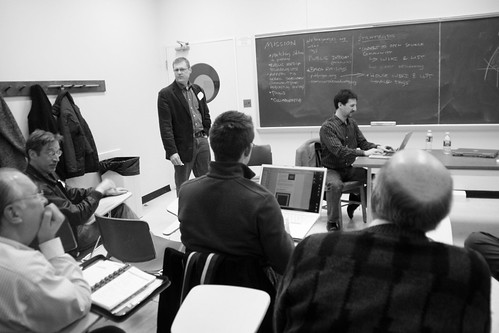 As I left the room, I was worried that the whole thing was going to get torpedoed by inside politics, with the IMA (despite their putting on their best conference yet!) only giving lip service to the discussion about opensource.

Especially since earlier today, I had found one of my posts was deleted from the conference wiki. Who knows why it was removed, I should temper my thoughts about people being threatened by where the discussion might have lead and consider that perhaps the conference wiki was meant to be more informational and less about discussion. And that’s fine. Either way, I recovered the post by looking at the history for the file and placed it here.

And it looks like my trust was well placed and my suspicions ill-founded. Who knows how the discussion went but I’m glad to see that they were able to find consensus around using pubforge as a del.icio.us tag for this discussion as well as for the accompanying domain… and then went on to define some great things on the beyondbroadcast wiki here (kudos to Bill Swersey, Bill Hanel and the entire group – what they’ve come up with shows some real bravado, not lip service in the least!).

It’s encouraging to see that in one session they were able to clearly define such a project. I’m confident if these near strangers can do this in two hours, that come next year’s conference we’ll have several success stories to present.