It was just as Pat and Stacy predicted it would be. Mardi Gras began promptly at 3pm, just as the tape was drying on the last minute touches of ribbons and streamers that we had affixed to our vehicles in preparation for the parade. Al and Linda helped me to decorate the Mini. And Stacy loaded us up with beads and coins and shirts and and frisbees. 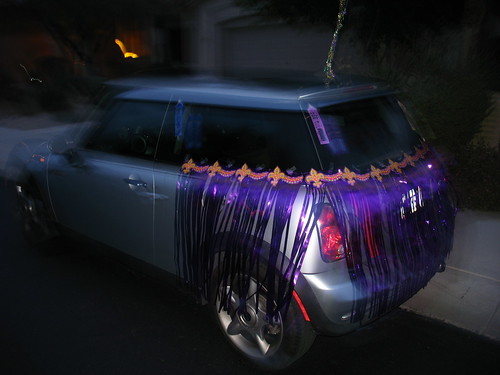 Nancy’s friend’s daughter and her daughter’s friend were all too eager to volunteer to pile-in to the passenger seat of the Mini and throw beads. This year’s King lived up to his title by coming out dressed as Elvis. He and the Queen took their throne in the back of Al and Linda’s Dodge truck and we all lined up at the end of the street as the crowd looked on from above. The girls stood on the passenger seat and threw beads out the sun roof as we slowly circled around the block. Stacy B directed the parade by way of her bullhorn. 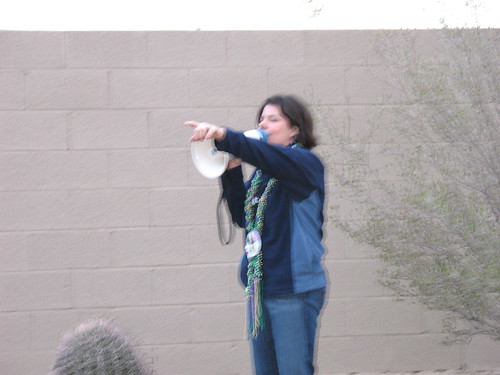 The guests lined both sides of the streets, yelling “Gimme something mister” and they were rewarded generously for their requests. And no sooner than the last trinket hit the sidewalk, then we all lined up in the kitchen for a plate of muffalettas and a bowl of red beans and rice and some spicy gumbo. 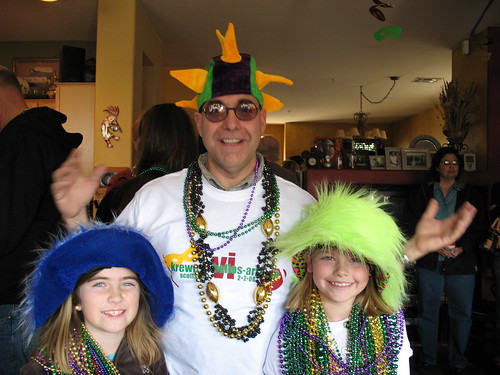 Stacy awarded my teammates and me with the distinction “Best in Throw” for which I received a stegasauras cap in mardi gras colors. After a bit of chatting with friends and colleagues, I gave Holly, Al and Linda’s daughter, a test drive in the Mini. (Good luck with your next car! I’m sure you’ll make the right decision). 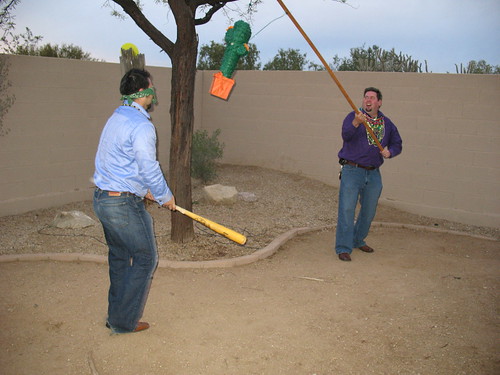 Next came the “adult pinata” — a paper mache cactus filled with airplane bottles of liquor. The first guest allowed herself to be blindfolded, then while wearing hight heels, she took swings at the pinata. The second guest tried his best as well. However Stacy’s cousin attacked the pinata like a designated hitter. After knocking off one of the arms, she proceeded, methodically, in denting the pinata till it agreed to give up its contents.

I chatted with Stacy and Carol. Then bid audeau for the night. What a great party! And what a great group of family and neighbors and friends. Laissez les bon temps roulez!