Our Ordeal with Mom at the Banner Baywood Hospital

One night in mid-December, Mom and Dad are out to dinner at a Scottsdale restaurant with Aunt Anny and Dee Dee Gordon. She gets up to use the rest room, and walking back, she doesnâ€™t quite feel like herself.

They decide she should go to the hospital. They ask her whether she wants to go East or West. She choses East, which brings her to the Banner Baywood hospital in Mesa, Arizona. 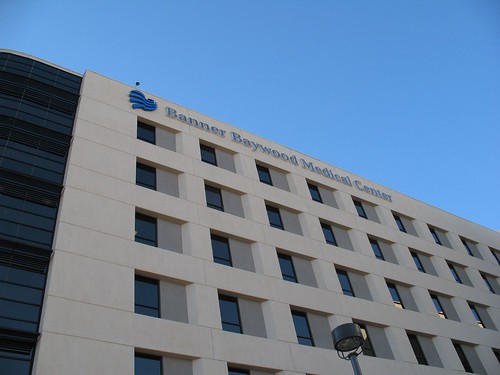 The next day, Auny Anny calls and fills me in on the news. I leave work to go see her. Rene gives me a silver Christmas tree and the decorations to bring to my mom. We set this up in her hospital room at the ICU.

She gets shuffled around alot. They move her downstairs to the 4th floor.

They move her back to ICU.

They move her back to the 4th floor.

Rene talks about her Christmas plans with my mom. Itâ€™s a secret.

Momâ€™s doing okay. Theyâ€™re trying to balance a bunch of factors: the lungs getting filled with fluid, her metal heart valve and the need to use heparin to keep her blood thin, that against her frequent stomach ulcers, and the fact that the lasix they give her to remove the fluid from her lungs makes her potassium and electrolytes get all out of whack and which then makes her heart beat irregularly. 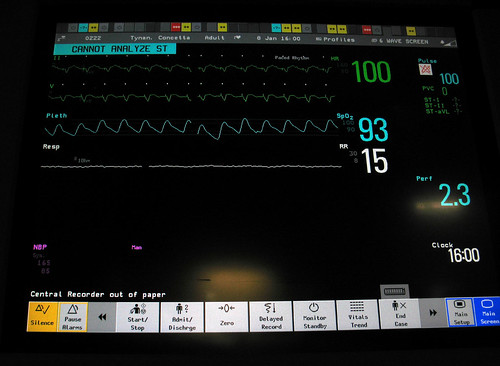 That said, they think they have found a linchpin in all thisâ€¦ the Lasix. Stop giving her Lasixâ€¦ then, put her on some quasi-dialysis contraption where they remove all fluid from her mechanically (rather than with medicine) and things should settle down.

They hooked her up to such a machine for seven hours yesterday and removed 3 liters of fluid. Today they were supposed to put in some permanent devices so that they could hook my mom up to this machine on a monthly basis. Sheâ€™s feeling reasonably better thanks to the procedure. Enough for my Dad to say that she has some of her energy back and is breathing better.

Rene and I drop by after work. There is a volunteer minister there. We hold hands around my mom and pray. Afterward, we take communion.

We go see her on Christmas Eve. Kevin & Cari are there. We play them my Reneâ€™s radio stories about the Kindle, and about my playing the accordion. We open gifts from Mom & Dad, including an electric egg poacher.

Rene brings a garland to decorate her hospital room. We run into Dick and Fran Lamden who bring a box of chocolates. Mom is fully doped up on drugs.

Reneâ€™s mom comes to visit. On the way to visit my mom, we stop at Wal-mart, where Toni, Reneâ€™s mom, plays around on one of the coin operated kiddie rides. Rene get’s a photo on her cell phone. Toni’s great for that kind of stuff. Not afraid to get goofy and just be herself. Like, for instance, here she is getting hooked up to the E-Meter at the L. Ron Hubbard house in Phoenix: 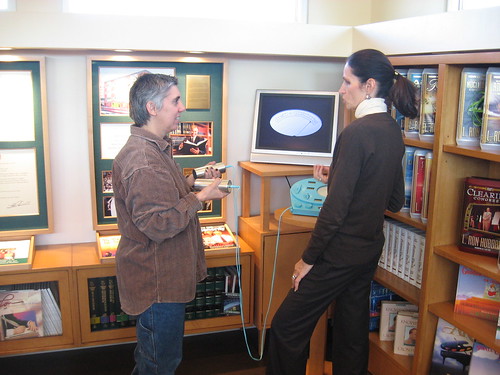 In the lull between the time that Toni Kay & Stace leave and the Gutels arrive, We go visit Mom.

I go over to the hospital with Taylor. Momâ€™s diet has been getting weird. Sheâ€™s taken to eating mayonaise and drinking sweet, Starbucks coffee or Jack in the Box vanilla shakes. Itâ€™s all that she can get down.

Rene gave her brothers a book about backyard explosives, so they all go to Home Depot for some PVC tubing and epoxy. Later, they have a makeshift mortar that is illegal to fire off within the city limits. John and Rene hop into the family van with with Reneâ€™s dad, step-mom, and her brothers and head out to Apache Lake for some good, clean fun. There are plenty of Second Amendment loving Americans out there dressed in camoflage and firing off rounds from their semi-automatic rifles into all sorts of trash placed on any number of rises upon the desert hills. Here we are igniting the Potato Cannon: 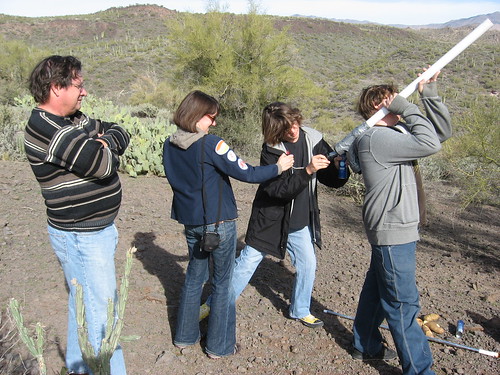 Weâ€™re at the hospital. Mom is having incredible pains in her side. Thereâ€™s three quarters of a Jack in the Box shake left. Itâ€™s sitting on her hospital tray.

The Dr. comes in, lays his hand on her belly and listens to her explain where the pains are coming from, when they started. In under five minutes he says, almost matter-of-factly, that itâ€™s a gall bladder attack, and that theyâ€™ll have to operate.

5pm: Iâ€™m at the hospital and they wheel Mom down to pre-operating area. I say, Mom, youâ€™re going to wait this out. Youâ€™re going out-patience this thing. And she agrees! She says with determination, â€œIâ€™m going to get better and Iâ€™m going to go home.â€ Kevin comes by. Dad, Rene and Aunt Annie, we all all take turns going in and talking with mom. I tell Mom a story about how Rene’s mom’s grandmother had to have gallstones removed and how, after the operation, she had the stones dipped in gold and made into a necklace. My mom laughs, even though it hurts.

Up in the waiting room, Chet and Will arrive. I offer to go out and get coffee for everyone. Tonight is the Democratic debates. I listen to Barak Obama, and I thinkâ€¦ hereâ€™s someone who listens, waits, and thinks about his response. This could be the next president.

11pm: Two doctors come out of surgery. He said that he was unable to go in orthoscopically and had to â€œdo an open gall bladderâ€ surgery. He said it had been years since he had to do one of those. He said the anesthesiologist was against the surgery, but that sheâ€™s doing fine.

They explain how we can ask the nurses how her different â€œsystemsâ€ are doing. Circulatory, Pulmonary, Cardiovascularâ€¦ ask them about her vitals in these areas to make sure sheâ€™s getting better.

After the surgery, mom is in the ICU. Sheâ€™s on a ventilator because she canâ€™t breathe adequately on her own. The surgeon said she needs all the prayers she can get. Sheâ€™s doing a little bit better today, but she has a long way to go to full recovery. 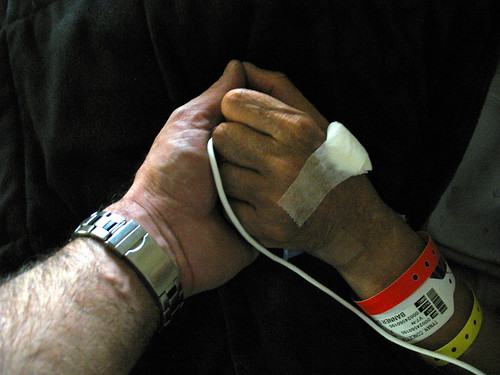 We spent much of the weekend at the hospital. Mom was there sleeping most of the time. Sheâ€™d open her eyes once or twice during the visit. Sheâ€™d squeeze your hand.

Bill called. We talked about getting together and about paying attention to the important things in life.

Today, my mom was taken off the ventilator and is starting to breathe more on her own. Her vitals are fairly strong.

While I was at the hospital with mom, Rene is at the house with Walt, Darlene and their new dog, Sputnik.

When I arrive at the office, I have a thoughtful voice mail message waiting from Walt. There are few emails from old, high school pals keeping mom in their thoughts and prayers.

Visited mom at the hospital. She opens her eyes just a bit, then closes them. 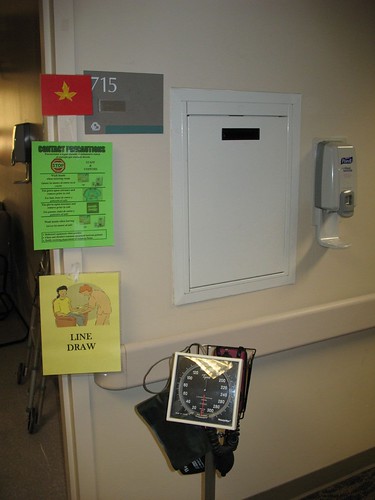 On the way home, Rene and I stopped at Organ Stop Pizza. I called Alex, just because I wanted him to hear the music. He was sitting up watching TV with Laurie. We chatted a bit about his recent trip down to Tucson to see Joe. I tell him how I always liked the one day we played chess and listened to music.

They move her to the 7th floor

They move her to the 5th floor

I dropped by the hospital today with a Martha Stewart and a People magazine. There were nurses all around getting ready to do some kind of treatment. Cheta was by giving mom a pedicure. She had all her tools, her lotions and cotton balls laid all around. Dad was there too. Things were way too busy, I only stopped in for a few minutes, then left to get over to Tempe Marketplace, where everyone was meeting at Kingâ€™s Fish House for my birthday. I thought Cheta was going to stay with my mom. But surprise, surprise! My mom kicked both Cheta and my Dad out, and told them to go to the party. 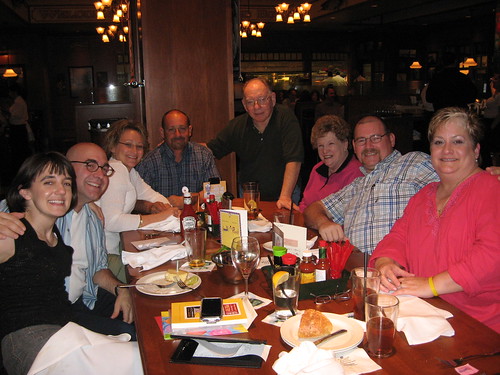 They took Mom off the pain medication on Sunday, and since then, sheâ€™s really perked up! It was like the light went on upstairs and she slowly started getting back to her old self. No more nodding off in the middle of conversations.

On Tuesday she was alert and could follow conversations, but she couldnâ€™t speak due to rawness from the breathing tube. She stood up and walked around her bed for the first time.

She walked once around the entire ward and they had put her on a pureed approximation of normal food.

Mom canâ€™t talk, due to having the ventilator in. I bring a white board by for her to use. The next day, I hear it came in handy for tracking her meals.

On Thursday, she had walked around the ward several times, and my Dad brought in some real food. Her appetite was back, her color was back, she was smiling and her personality was in full bloom.

Stopped by in the evening to visit. Found her up in bed, smiling and watching TV. We sat and talked about Reneâ€™s upcoming trip to France. I told her how I submitted a pair of poems to an old friend who now edits a literary journal in Boulder, and how this came about as a result of my volunteering at the piper center and leafing through a random periodical. She was tucked under the covers, all warm an snug. We relaxed and chatted till she said it was time for her to get some rest. 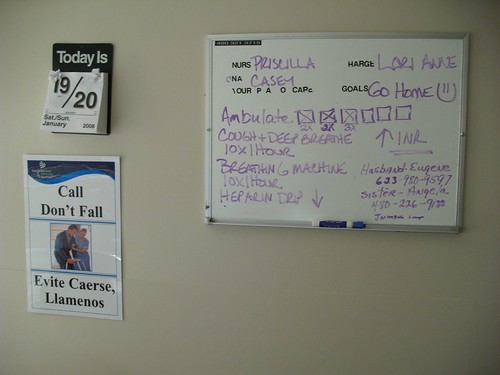 Go out to get dinner with Walt while Rene entertains Darlene and Sputnik. Dad calls. Mom is doing better. They are starting to talk about when they might discharge her from the hospital.

Rene has been editing her Jody Gnant story all morning. I take the dogs out to the dog park and meet some other dachshund owners. We all stand around and talk, till Alfredo has enough and barks at a bulldog. Not bright. I pack up the pups and we head home. Rene and I curl up on the couch and watch a couple of episodes of Homicide. My dad calls to let us know theyâ€™re letting mom out in an hour or two. We put our things together and take the way too familiar drive into Mesa on the 60. On the way we stop to get a helium balloon. We want to get one that says, Congratulations, you did it! But they were out. So we come away with a cute hello kitty balloon for Mom. 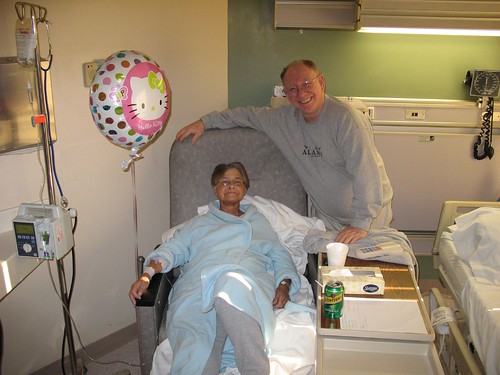 Momâ€™s all suited up in her sweats and sneakers. The mood is celebratory! They remove Momâ€™s IV. The last of the tubes have been severed. Dad takes momâ€™s blood pressure cuff, wraps it around his neck and sticks the tube up his nose. Dad fakes the face of some tragic victim. Everyone groans nervously. I get a somewhat blurry photo of the moment: 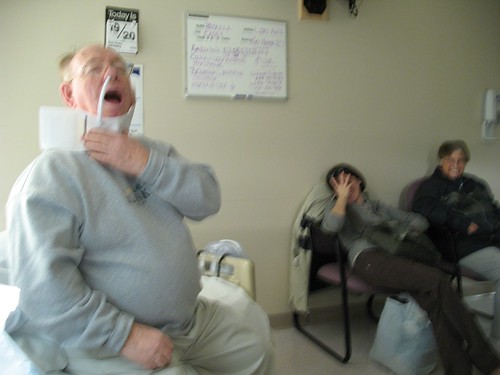 Eventually, the wheelchair arrives and mom takes the elevator down to the first floor. We help her into the passenger side of the SUV. There are a few quick kisses, then she and Dad drive off, waving goodbye to usâ€¦ and I suspect to Banner Baywood for a good, long time. 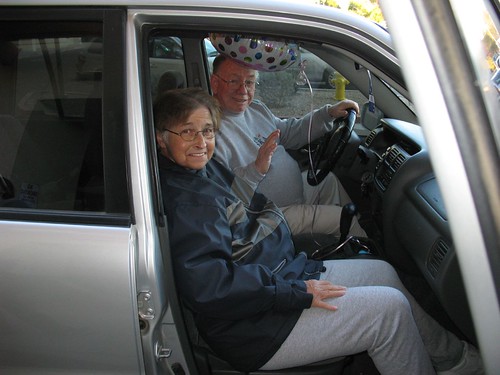