Making It to Marseille 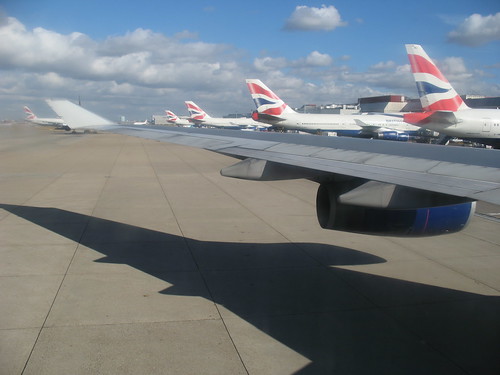 Flying on British Airways, you have to get used to a slightly parallel universe when it comes to language. carry on luggage is hand bag etc. But after that, everything was efficient and polite. I rang for assistance a few times during the flight, and I swear, it was right out of “are you being served”. I sat next to Tim, who was traveling home from seeing a friend near Oracle, Arizona, just outside of Tucson. He was friendly and we chatted briefly over the course of the nine hour flight. The first part of which, I slept. The next part I edited the last, half-dozen remaining conference notes and read the interview with the author at the end of Francine Prose’s reading like a writer.

At the Heathrow terminal, I picked up 30 pounds to pay for the shuttle bus to Gatwick. The clerk was nice and he gave me a coupon for a free cup of coffee at Starbucks.

Waiting for the bus, there was an Italian who kept asking people if this was the shuttle to Gatwick. It looked like his nervousness could complicate the simplest exchange. I kept a wide berth. I was typing away some last minute notes on my palm TX when a businessman commented on the setup. He said t was ingenious, and how, due to its weight, he left his laptop at home. We made good time between airports. Passing by parcel after parcel of fields dotted with cattle.

Arriving at Gatwick, I checked my bag and went through security. Leaving the security area was like opening up onto the Emerald city of airport shopping. Entranced by the electronics, I scraped together enough in American dollars, the few pounds I had remaining, and some additional change to purchase a usb / car adaptor for the Palm. There was also a Roxy/Quicksilver store and so I deliberated between half a dozen shirts to give as a gift, for Rene. Later, at the Starbucks, enjoying my free cup of socially responsible coffee, I dropped who knows what on a five minute wifi connection and shot off the five blog posts that I had polished up on the plane, bringing closure to my Los Angeles trip and letting me pass guilt free, my responsibities lifted, into another adventure.

During the last two hour flight, I read a bit more from Francine Prose and fiddled with the new accessories for my gadget, putting on a fresh screen protector and struggling with a leather carrying case that I deemed completely useless.

At one point, my cabin mate was scribbling into a spiral notebook. His writing looked strangely ordered and I thought? Could it be? Is this poetry? Oh my, I am sitting next to a writer who is going home to Marseille. I was careful not to interrupt him, but during the last half hour of the trip, I asked him if he was a writer and he seemed surprised. No, he was a network architect for an oil company, KBR, and he travels around the world setting up computer networking systems. In this case, the network will go up quickly, last for half a year, then get taken down. We chatted some more. I showed him one of my poems, which he liked, and by this time the plane had landed so we filed out of the plane and out into the terminal to pick up our bags. 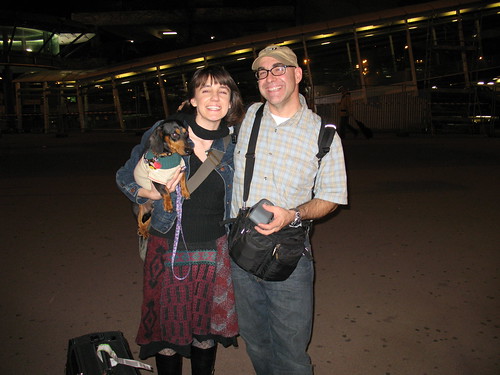 Entering the waiting area for arrivals, I saw Rene – picked her out first thing out of the crowd. She snapped a few photos and we kissed, so good to finally close the circuit between us. Alfredo didn’t recognize me at first, but in a moment and a half the lightbulb went off and he started wiggling and shaking happily.

We walked out to the bus and, picking up our tickets, I ran into Dudley again and asked him if he would take our picture. Waiting for the bus to come, Rene tells me how she made it onto the Marketplace Morning Report by voicing a story about price fixing in Paris. She turned it around quickly, going upstairs and covering herself under a blanket at record the spot. She did two takes with her digital recorder and sent the files along to Marketplace unedited. She said, she even added a bit of the signature Marketplace panache by closing with “how do you say ouch in French”

We arrived at the metro station which was a brightly lit glass structure with tall trees growing within. Rene told me how, in a recent political race, a candidate for office said that the first thing he would do, if elected, would be to extend the hours of the metro. Not to be upstaged, the incumbent enacted this change himself, so we were able to board the subway at 10 pm, when just a week later, we would have had to take a taxi.

At the port of Marseille, Rene shows me the blank expanse of space where the fish market would set up fresh each morning. She showed me the wireless cafe where her friend spent three and a half hours trying to get the files off her laptop.

I lugged my luggage behind me, the wheels clattering on the corrugated sidewalk. We stopped at an Irish pub, but the kitchen was already closed. We stopped at a middle eastern restaurant, but at first the guy would not let us in with a dog. He admonished Rene about keeping Alfredo on the leash and not letting him run around. Then, after lingering over the menu and picking at a few spicy olives, we asked if we could have a kibi appetizer and split a plate of assorted specialties. The waiter said that there was no sharing. At this point, Rene had had enough and politely said that, thanks but not thanks, we would be leaving.

Minutes after, while crossing a side street, Rene and Alfredo are almost struck by a speeding vespa. I shout, Hey and she pauses just in time to be missed. I continue to drag my valise through the streets. Hip, young Europeans are out for the evening. They’re all heading into the port while Rene and I are heading into the outlying neighborhood.

Nearing the apartment, I heft my suitcase up onto my shoulder and ascend a long flight of steps. Midway, Rene stops to take a picture of a sign on a shisha bar which had closed due to the new anti-smoking laws in France. Still a few blocks further…

Finally, Rene leads us to a worn wood door, more like a splinter in the city’s skin, and we enter into a slender hallway. Rene goes in first and I can hear the sound of people laughing and carrying on. It’s a party. And I am welcomed in. We shake hands, Cati, Olivier, David, a woman and her daughter, and another couple. Rene and I are given a glass and rich red wine is poured. We all toast, which Rene exclaims is “To Togetherness!” There is much speaking in French, I simply relax and take it in.

Little later on in the evening, I pull out of my bag, a gift for Cati. She pulls out the sweater and trys it on. She is so excited! I take a photo of her and Olivier and Rene. Cati tries to explain the connection that she felt when Rene contacted her about making arrangements to come to Marseille. This explanation trails off… Cati’s emotion takes over, the words seem to fail. 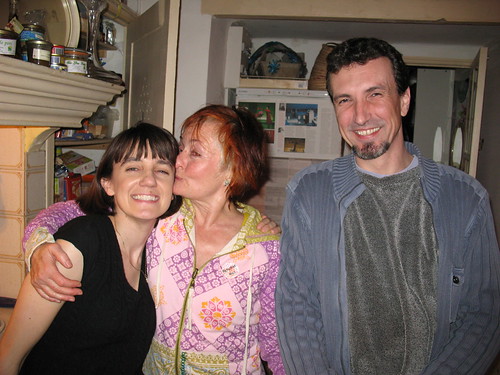 Afterward, we all go into the kitchen where we are served spread of spicy red peppers, prosciutto and cheese, and bread. We pour around another bottle of wine and we find that David is a stand up comic, a director, and a set designer, and that he has a play that is being performed here in the city.

David talks about how he stayed for two months in a very small apartment. The girl makes a great joke how you could go to the bathroom and shower at the same time, which is just wrong. I respond with the story of how, before I met Rene, I lived without air conditioning and how my house was barren, and how after Rene moved in, all that changed. I tell them how my house now has a woman’s touch, and how we have this cupboard from Mexico which was expensive, and how my dad did not understand how we could find such a rickety thing of value. I tell them how there is a salt and pepper shaker of Snow White and Dopey and how Snow White is bending down to getting kiss the top of Dopey’s head.

The dishes are cleared from the table and we all file out for the night. It is good for Rene and I to be, once again, in the same bed.