February 22, 2008 in publicbroadcasting | No comments 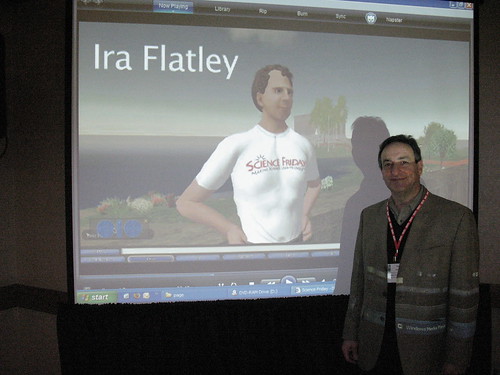 Thinking that the Ira Flatley avatar looks like an Ira Flatow action figure. Could you imagine that – a collection of public broadcasting dolls for kids?

Second Life People are private people. They literally have to run after these people to get their comments on the air.

Second Life only has 40,000 inhabitants right now – as compared to their hundred of thousands of people who listen to the show via the broadcast.

The Brian Lehrer Show from WNYC

Jim Colgon – Now with BBC / PRI’s show the Takeaway. Used to be with the Brian Lehrer show. Experimented over his time at WNYC with Social Media.

They had great listeners – Experts! Wanted to tap into that.

Thought of a simple assignment… Ask people to count the number of cars on their block and report back on their comments page with how many of those cars where SUVs. Gave them a week to do this. Wound up with 4000 cars and mapped them on google maps. Wound up with the percentage and the total. Called it a “listener reported project” Invited an expert onto the show to talk about the results and about the use of SUVs for people in lower New York.

It got people looking around their surroundings in new ways. A way to get their listeners involved in an act of journalism, in an act of reporting. Because it was a listener reported activity, they looked at it with a different kind of attention – not just a bland report from a survey.

A great example of “crowdsourcing” – an act of journalism that one person, or one newsroom, could do.

This led to additional projects:

Asked people to find out if there was price disparity in stores. Picked a few standard items. One quart of non-organic whole milk. One head of iceberg lettuce. And a six pack of budweiser beer.

They compiled the totals. Generated a map for milk, for lettuce, then beer. They called the resulting show “Are You Being Gouged?”

This was reported about in the New York Times.

This increased peoples awareness. People were doing reporting. They felt like reporters.

The repurposed their existing tools. They used comments tool at wnyc.org, they used google maps.

They found that the simpler it was the more response they received. The level of complexity of the task was prohibitive.

These kinds of acts help to involve listeners in a way that they had never been before.

They had no idea what the results were going to be. They found, for example, that the price of milk is regulated by the state of new york, and they found a few listeners were going to challenge stores whose prices were above this level.

This only came about out of the willingness to experiment.

Her show recognizes artists and people doings online who normally would not get recognition.

Epic FU poses question to audience, for instance, about woman who wanted to commit suicide in 90 days. Participants in show responded as part of a “campfire discussions”

Zadi uses Mix discussion boards – allows listeners to create their own groups – allows the producers of the show to find out what the audience are interested in.

She also has show on YouTube. Great to have discovery… Great to get video out, but at a point you want people to come back to you.

She advises us not to depend on one social networking sites. She uses Ning.com . She uses Upcoming. And she keeps up with everyone via Twitter.

While work on the web site and think that I’m in a position to advise on what happens on the web at KJZZ. In this case, Paul Atkinson producer for KJZZs weekly hour of the locally produced segmet of Here and Now, took advantage of the tools and – on his own – did a great job conceiving of the idea for calling bloggers… As experts! They’re not just people with opinions writing on their private islands online, but they’re experts in their own right.

As a producers, Atkinson was surprised that they were as informed as they were. Additionally, Bloggers promoted their appearance on the show, so people were attracted to join in on the discussion who normally may not have listened or visited the site.

In an effort to recruit bloggers, Paul looked to calling people he knew and trusted in the field of politics. These trusted peple suggested a few sources. They also suggested that Paul join a listserv. Paul commented that he received so many responses that he had to turn people away. That he only had room for one democratic blogger, one republic and one independent.

In the questions section. Ira says, you have to tell people you are there. That’s why Science Friday is offering videos for people to put their sites, to direct traffic back to sciencefriday.org and back to the show.

Someone in the audience asks if Paul had difficulty getting bloggers to blog at KJZZ.org and not on their own blogs. This presents an interesting thought which I will post a follow up in just a minute.Similarly, Paul admits that, coming from a traditional broadcast background, to recruit bloggers he relied on contacting people he knew by phone or email, then getting referrals for the names of bloggers whom they trusted.To address both of these points, I pose a question to Andy Carvin with Paul present… I ask Andy what he thinks about news rooms using a Technorati keyword search to find out what bloggers are saying about a subject… As a way of enlisting trusted and active bloggers about a topic for a particular show. Andy replies that, “if you aren’t doing that, you are in the dark.” Andy poses too that just as technorati is an indispensable tool for finding out what people are saying online about a topic, this tool is also indispensable for finding out the impact OF THE TALK SHOW ITSELF online. Andy recommends that talk shows set up a “watchlist” in technorati or their show (or station), to find out what people are saying about the station NOW, across the entire web.