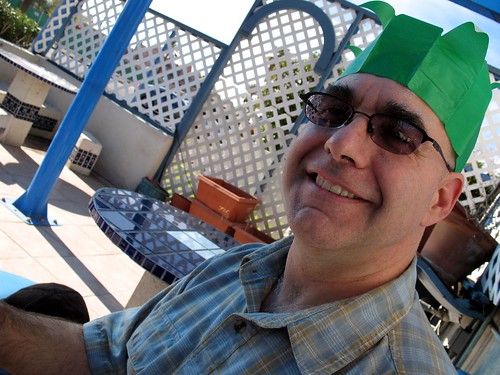 John on his 45th Birthday, originally uploaded by johntynan.

Before I say anything, I have to tell you DON’T GO TO WORK ON YOUR BIRTHDAY! Other, smarter people than me, have figured this out. And this year proves it. Some days just don’t start out like they should. And today, on top of being my birthday, was one of those days. Between catching my keyring on the back gate and splaying a half dozen keys into the back alley, between that and a myriad of other things that I would rather have not cared a darn about. I have to tell you, as I tell myself, DON’T GO TO WORK ON YOUR BIRTHDAY!

Fortunately, levity returned as Rene kidnapped me and surprised me by taking me to lunch with our co-worker Marcos Najera. I enjoyed the shaved lamb and daubed torn triangles of pita bread (strictly off my diet) into a pool of hummus, and topped it off with a single Greek olive. Opah!

As we ate, Marcos told us all about his “Presidential Decision” to move to Los Angeles. What is a presidential decision, you may ask? It turns out Marcos was told in Mrs. Hanson’s third grade class that you could be president when you were thirty five. Well, thirty five came and out of nowhere it shook Marcos to the core. He had it in his mind all this time that when thirty five came around he would have either beome president or have achieved some similar level of noteriety. Well, he was as shocked as anyone might be in finding out that a mid-life crisis could be brought about by perceptions of the world that were formed before he was even 9 and that simmered in his subconscious, seemingly forgotten. Thirty five had come around for Marcos, and I remember him calling us while we were on vacation, sunbathing out by the pool at the MGM Grand in Las Vegas. Were we not exploring Nevada’s artificial gold mine, we would have driven out with him as he sped along Interstate 10 through the Arizona desert at night to make it to Los Angeles by midnight, by the time he was 35. 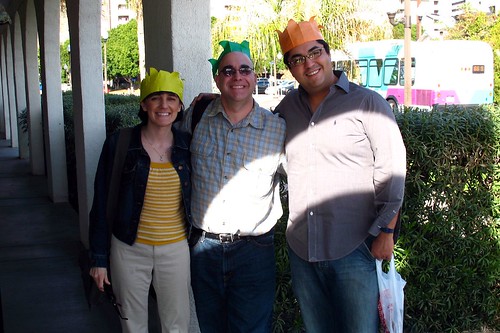 We talked about this over lunch, and I have to say not only did our friendly conversation save the day, but it made me consider “What is a birthday, anyway?” What should it mean? I mean… 45? What an arbitrary distinction between the person I was yesterday, as opposed to the person I am today? Especially since I still feel, in essence, the same person I was, and have been, over all these years… only better!

So, my conversation with Rene and Marcos, I think, helped me to come to some kind of an answer is that each numerical year gives you a benchmark to say, looking back, where was I at 25, at 35, at 45? etc.

44 was my second year of deepening love in marriage. It was a year of nurturing new friendships (Marcos, Walt, Darlene, Katrina, Howard, Jake my guitar tutor for a month, and more), and trying new things:

This past year, I looked at old, outmoded work and patterns, evaluated new options and moved forward… in a phrase, I adapted to change.

45 may be the year we move to France. 45 may be the time that I apply my passions to fresh new projects and that I continue to aim to protect regular, extended periods of poetic writing and thought. Who knows? I’m sure that, at some point, I’ll be looking back on 45 and taking stock.